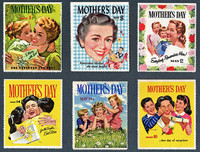 The paradox of Mother’s Day is that its founder, American Anna Jarvis, spent the latter years of her life denouncing the commercialization of it and lobbying to have it removed as a national observance. Yet , its modern day origins is quite noble and perhaps for that reason, we still celebrate Mother’s Day with time-honoured brunches, flowers, chores done for Mom, and Mother’s Day gifts, including great gifts of comfort from AgeComfort.com.

Just as paradoxical as Jarvis’ struggle, the story of Mother’s Day begins with war and ends in peace. Israeli actress Gal Gadot is Hollywood’s latest incarnation of the fictional Wonder Woman, and her alter ego, Diana Prince, the Amazon warrior princess. But even such an accomplished fighter as she, Wonder Woman’s role in her latest adventure, was to play peacemaker to combatants Batman and Superman in Batman vs. Superman, Dawn of Justice. Gadot is a mother herself, and a trained soldier who served in the Israeli army. And while many women and mothers like Gadot, have been warriors, the role that women have been best known for during wartime, is that of peacemaker.

Just as Gadot playing Wonder Woman, amid the mayhem of violent battle, quietly steals the show as the voice of reason who reconciles the dueling superheroes, peacemaking mothers, past and present, are remembered reverently, long after the glory and agony of battle fades. Whether it’s peaceful protesters in war-torn countries half a world away, or as close as who gets first dibs at the new game console at home, most of us would agree that Mom as peacemaker plays a role in our everyday lives. It’s not surprising then, that even the roots of modern Mother’s Day as we know it in North America, begin in war and the attempts of mothers to make peace.

Anne Reeves Jarvis, an American mother living in West Virginia founded “Mother’s Day Work Clubs” in the mid-1800’s to teach local women how to care for their children. Later, these clubs became a unifying force in the region that had been divided by the American Civil War (1861 – 1865). In 1868, Jarvis organized “Mother’s Friendship Day”, gathering mothers with former Union and Confederate Soldiers to promote reconciliation.

Following the death of Ann Reeves Jarvis in 1905, her daughter, Anna Jarvis initiated Mother’s Day in May of 1908 to honour her mother’s peacemaking efforts and the sacrifices that all mothers make for their children. With funding from retail merchant John Wanamaker, Jarvis organized the first Mother’s Day Celebration at a Methodist Church in Grafton, West Virginia. That same day, thousands of celebrants also gathered at a Mother’s Day Event in one of Wanamaker’s Philadelphia stores. By 1912, many churches and communities in the U.S. had adopted Mother’s Day as an annual observance, and in 1914, President Woodrow Wilson officially declared the second Sunday in May as Mother’s Day.

Why Shop With Us

Auto Order Never run out of important supplies.
Discounts on all Auto-Orders.

FREE SHIPPING Any order over $50 ships free.
Save Time & Money On Your Shopping.